So kick-ass author RM Gilmore, author of the dark and hilarious Dylan Hart Series has gone and given her already fabulous series a squeaky polish and revamp. It’s received new formatting thanks to InkStain, a tidy-up edit from Hot Tree, and now a ‘graphic’ cover makeover!
Now is the ideal time to check out this fabulous series with book one, The Scene, on sale through the tour for 99 cents!
Book One – The Scene

WARNING: Excessive Sarcasm & Adult Language
Irreverent twenty-something and journalist , Dylan Hart, has her little black heart set to cashing-in on the blood-drained bodies of seven prostitutes scattered throughout southern California.
In an attempt to write her first best-selling novel and pay off her ever growing student debt, Dylan begins the search for the culprit of the media-dubbed Vampire Massacres, diving head first into L.A.’s sanguinary ‘vampire’ subculture.

Not your daughter’s vampire story, The Scene escorts readers into an all too real sanguinarian lifestyle and drags them through a bloody good mystery. Horrible pun intended.

WARNING: Extreme use of the F bomb. Reader beware.
The bitch is back in this second installment of the Dylan Hart Odyssey of the Occult series. The graciously irreverent Dylan Hart, is at it again this time from down in New Orleans. In an unfamiliar city, surrounded by ‘vampire’ elite, Dylan finds herself entangled in the underground world of blood and lust.
– Or is that bloodlust? –
Dylan is forced to sift through fact and fiction when she encounters a new, and much more frightening, villain. Voodoo. Who do?
Book Three – Sacrifice 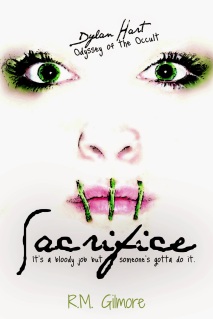 WARNING: Contains cynicism known to cause laughter and suspense that may affect heart rate.
Dylan has found herself in quite the conundrum. Locked in her apartment with an unknown voodoo beastie hot on her tail. She’s tits deep in death and it’s knocking down her door. Literally.
Endless Night left you with your heart pounding and your stomach in your butt. Sacrifice will flip you upside down and take you on a ride that will leave your knees quivering and your head lying on the floor…literally.
Killer Giveaway

HERE is the Rafflecopter giveaway

Join 8,500 other followers
My Tweets